Bennie came from a local Cavy Rescue to be a partner to Jet after both pigs lost their original best friends. Although they never became close snuggle buddies, they enjoyed each other's companionship. Bennie has always been a bit more worried about life and things than Jet. Born in 2015, Bennie is a senior guinea pig.

Bennie developed pretty severe arthritis early in life. The vet thinks it was likely from not getting good nutrition when he was just a baby. He has periods of pretty significant pain that is managed well with pain medications but most of the time he is comfortable and content without that medical support.

Until recently, both he and Jet lived together in a smaller one level home to support their little arthritic bodies. Since Jet's passing, Bennie now lives alone in his home but is surrounded by other bunnies, guinea pigs and chinchillas in our small animal barn. 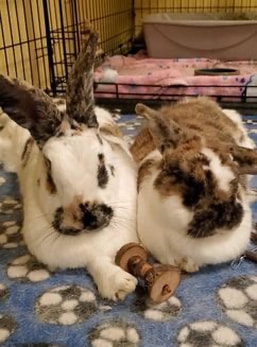 Copper became part of the One Heart Wild family after his former bff Sunny chose him from a local rescue. Sunny had come to One Heart Wild by accident, as a little bunny headed for life in a breeding barn. After moving into the house, we fell in love with Sunny. Being sensitive to the fact that all social animals need social company of their own kind, we wanted Sunny to pick a friend to share her life with. We took her to a bunny rescue where she got to hop around and meet the bunnies looking for a forever home. She chose Copper. ​

Copper and Sunny became the best of friends and have spent much of their time together in and out of their cage, exploring the house and deck with the dogs and cats. Sunny recently passed away, leaving Copper behind. Lonely and adrift, Copper misses his best companion friend. We have decided to move Dottie into the house, placing her cage next to Copper's. We are hopeful they'll become friends and offer one another companionship in the wake of Sunny's passing. 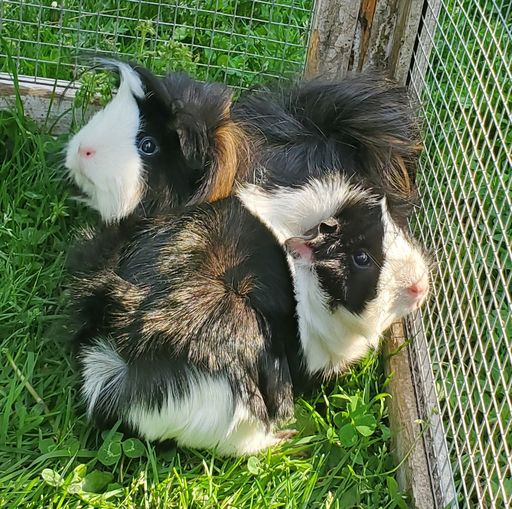 Shyla and Twyla guinea pigs were brought to sanctuary after their young owner was found to have severe allergies. Shyla was purchased by her previous family from a pet store and was soon found to be pregnant!

After Twyla came along they needed a safe place to land and we happily offered them a space in our bunny barn. They soon met our elderly male guinea pigs and quickly made new lifelong friends.

These girls are still learning that humans are safe and fun to interact with, and have even made a trip to local schools to teach children about proper care for their species.

Shyla & Twyla, like all of our guinea pig and rabbit friends, enjoy safe, secure time in the sunshine and grass during the spring and summer months. They like nibbling the clover, sniffing the smells, and watching the goings' on at Sanctuary. 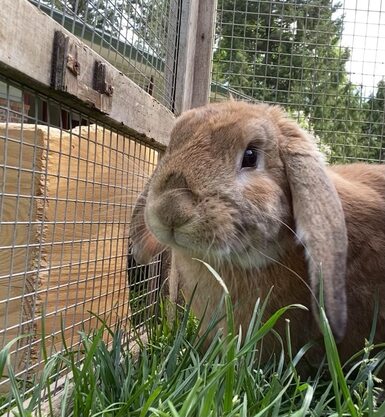 Duncan bunny was found in the woods by a local family. Their son had spent time in our Animals & Empathy Program at his school and thought we might be able to help this extremely social rabbit. As soon as he arrived, we knew he would fit right in.

Duncan is more dog than bunny. He enjoys vigorous scratches, all humans that stop by his cage, and frolicking in the grass. He is full of energy and enjoys going to schools -- running around classrooms and jumping in kids laps.

We offered him a friend via speed-dating, but after meeting several other rabbits, we found he much prefers humans over his own species. And here at One Heart Wild, we respect that decision!

Duncan is a staff, volunteer & visitor favorite. Make sure you swing by and visit him when you next come to Sanctuary. 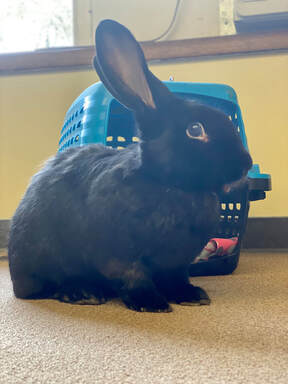 Through Duncan bunny’s speed-dating experiment, we found Remi. At first, she and Duncan made a connection. But when we brought her home, we soon realized that they were not a match.

Remi was rescued from a hoarding situation with a serious eye infection. Though the infection was treated, she was found to have extensive vision loss. Subsequently, she struggles with chronic eye infections that are treated by our awesome vets.

​Remi now lives in the bunny barn and is surrounded by other rabbits, guinea pigs and chinchillas. 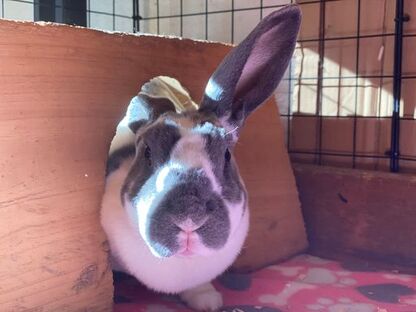 Dottie bunny was found on the side of the road in Port Orchard. A Good Samaritan picked her up and immediately brought her to us. We took her in and tried to find her family. After no one came forward, we got her checked by our vet and made her forever home in the bunny barn.

Dottie is the softest bunny you will ever touch. She is also sweet and loves soft caresses and grooming. Dottie loves when visitors come to sanctuary and comes out of her cage to greet all.

​After the passing of Copper's friend Sunny, we introduced Dottie to Copper in the hopes they would become companionable. And after several months, they have! They now choose to spend time together and have developed a lovely friendship. 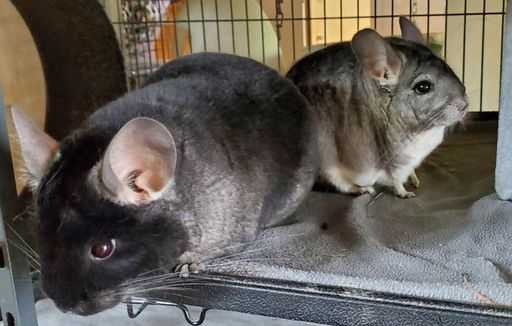 Picchu and Mika (chinchillas) came to us separately. Picchu was found loose by animal control and brought to our local humane society. She has some missing hair in places and needed to be seen by an exotic animal vet.

We took her in and provided specialty care for her skin condition. Knowing that chinchillas are highly social, we started to look for a friend for her. We stumbled upon Mika on Craigslist. She was being offered for free after her child owners lost interest in her. As soon as we introduced these two, they became instant best friends.

They often sleep cuddled together. When we provide their dust bath bin, Picchu always jumps in first. Mika happily bathes in the dust outside the bin that Picchu spilled. Through their work with young clients, these gals have found that humans are pretty awesome. Instead of being held and cuddled, they prefer to stand on your palms and touch noses. Watching them eat is a favorite pastime for all. They enjoy chewing sticks by eating them like corn on the cob! 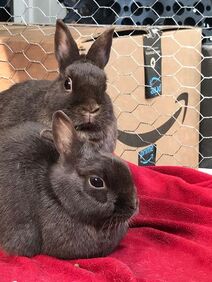 ​We took in several Polish bunnies ranging in ages from 2 - 9. They have not experienced a bunny life or the life a loved bunny living with humans. Living in small, individual cages, they have not been able to be social, or to race around, bucking, standing, and being joyful. As products of the breeding industry, they have spent their life as potential producers of the "perfect specimen" for show and competition. Our goal is to transition them from producers to part of the family.

​They now have potty boxes, a bed, regular meals, and they are all learning about fresh fruit and vegetables. It is quite surprising to give bunnies fresh greens, or sweet peas, a strawberry or banana, and watch them not know what to do with it. They are learning that good things happen when people come around; they get yummy food, cuddles and loves, and carried outside to spend time on grass in enclosures big enough for bunnies to exercise their bodies and then flop on the grass and take a nap. 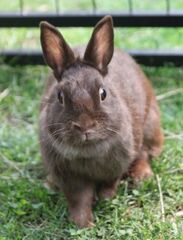 Boo suffered some trauma and her coping mechanism is to become invisible. When she came to One Heart Wild, she literally shrunk into the corner of her cage if we looked at her and when we picked her up to take her outside. She was scared to death, and we could feel the tension in her body when she was held. As her personality emerges, she is curious and quite a character. In time, we expect her to fully recover and enjoy her new life free from the fears of her past. 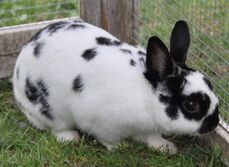 CeCe has such a curious personality. When we pick her up to love her or to take her outside for time in the sun and on the grass, she looks right at you. It is so amazing to see her confidence and curiosity expressed in her willingness to make eye contact.

She was the first one to figure out she could come right up to the door and take a treat from our hands. She is also willing to try anything we offer. 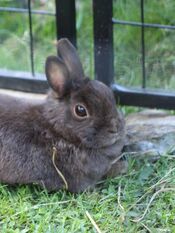 Bianca has had some trauma in her life and used to be defensive and protective of herself. She also had some damage to one ear ... maybe frostbite? Since her arrival, Bianca has become one of our most cuddly animals. She has learned that humans are safe and will respect her boundaries.

She really loves to be pet and will crouch down and close her eyes with enjoyment, but she can't tolerate humans who won't give her time to trust. 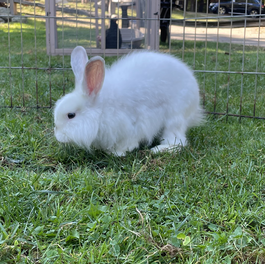 Bruce is a 4-5 year old Angora boy who was found in Bremerton. He was underweight and covered in mites. A woman took him in, gave him medical care, and hoped he would be welcomed by their other male bunny. Unfortunately, that was not the case.

Since Bruce is so connective and still in need of some medical care, we made the decision to bring him to sanctuary. Bruce is sweet and friendly and loves human affection. He is quickly becoming a staff and volunteer favorite and we are so glad he's found his forever home at One Heart Wild. Welcome to Sanctuary, Bruce! 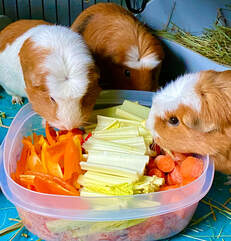 Forever foster guinea pigs Sprout, Cedar and Willow were taken in by One Heart Wild’s manager, saved from being sold as snake food. The three siblings now spend their days playing and lounging in their cage mansion.

​Every few weeks they accompany their human to local schools and help teach children about humane education, boundaries and empathy for animals. They are curious, and once they trust you, they even like to sit on your shoulders!
Donate