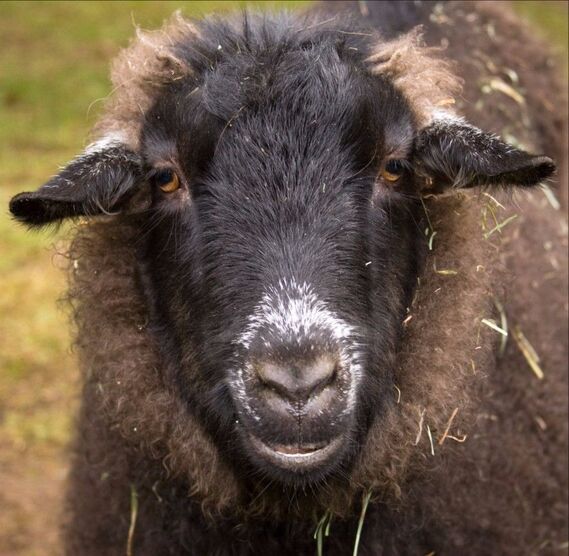 ​Sparkle – AKA Sparky came to the Bowen family in 1999 as a bottle-fed baby with a herdmate baby of a different breed, named Eddie. Both babies came with the disease CAE. Complications from CAE ended Eddie's life in 2013. Thankfully Sparky's health was not similarly impacted and he went on to live another 8 years. He was 21 when he passed. The oldest goat on record for both veterinarians who treated him. Sparky looked like a sheep in the winter due to his angora roots and a goat in the summer due to his pygmy roots. His looks were always a topic of conversation and some confusion.

He grew up playing head butting games with the kids and was still rearing up to play into his 20th year. He loved doing animal assisted therapeutic work. So many of our clients connected deeply with him. Young and old, most with high levels of anxiety and/or depression, found friendship with Sparky the tonic they needed. He had many friends who loved doing special things for him like making him winter fleece blankets, stopping by with one of his favorite treats, and spending time grooming him.

Sparky parented, mentored, and befriended two new goats to the herd; Jeffrey came shortly after Eddie died and Flower came in early 2017. Sparky was generous with his attention and support.

​For the last five years of his life he enjoyed time outside of his enclosure roaming around looking for the best places to nap, eat, and socialize. He had special bonds with a few of the horses. April was particularly close with him and they often had verbal conversations. He liked Izzy and Dixie a lot as well and spent many hours hanging out around Montana. He taught us so much throughout his life. Not the least of which, the potential goats have for a long well lived life and the sacredness of being in relationship with him during his super senior years. He lived with grace and dignity for 21 years.

Sparky was here before One Heart Wild was born. He fit right in to all the new activities and greeted new Sanctuary residents with curiosity and enthusiasm. He is missed greatly and remembered for all the gifts being in relationship with him gave us. 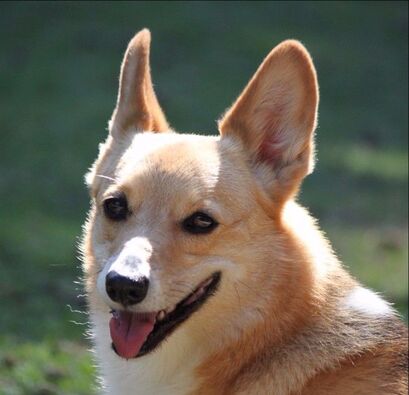 Grace doesn’t have an adoption story, hers was a human rescue story and a testament to the synchrony and comfort our bond with other animals can be. Drea’s 98-year-old grandmother in Montana was in decline and dying in 2006. While spending the final weeks of her life with her, and grieving the imminent loss of one of the most important people in her life, Corgi puppies were being advertised in the local paper.

With three dogs at home, a new puppy wasn’t in the plan but Grace WAS in the plan. The breeder said that one puppy wasn’t quite right, her left eye was lazy and she suggested not considering that pup. That was the only pup Drea saw. She picked her up days later to share the drive back to WA. They didn’t make it out of MT before a uterine infection created the need for an emergency stop at a vet. Caring for her helped Drea move through her grief.

Her name, Grace, was in honor of how Drea's grandmother lived and left her life, and it is how Grace lived hers. She befriended every human and nonhuman animal who came to the Sanctuary with special patience for the chickens, bunnies, and guinea pigs. She loved participating in animal-assisted services, visited many schools, and showed incredible patience for children. She LOVED children.  Grace was the heart of the Sanctuary. She was represented on the One Heart Wild logo to honor her contribution to our mission before we ever knew how epic that contribution would be. 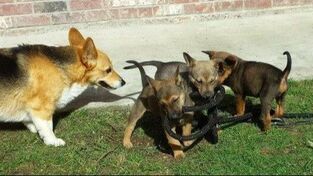 ​​Gracie was a tolerant Auntie when her home was invaded by 5 foster puppies who demanded everyone's attention and extra care for weeks. Their mom and siblings were found in a ditch in California with a deceased adult dog. They came to Washington by way of a rescue organization.

They most certainly would not have lived without intervention. They were very sick with a heavy load of several different types of parasites. Happily, all the puppies found forever homes, one of them, Arrya (middle), within the One Heart Wild family.

​Homer was well in to his teens when he came to Sanctuary. It is emotional to remember his presence. He was the rock of the domestic group of horses. Homer was instrumental in helping Montana orient towards healing. He had a love affair with April that included intimacy, he welcomed Skye and fathered him through his illness and transition, and when Johnny and Sierra were born he was the best Uncle you could imagine. He taught us so much! We didn't get enough time together and we treasure every precious year he was with us.

​Homer was a professional roper and when he couldn't do that anymore he was a barrel racer and when his anxiety being raced became unmanageable regardless of the painful mechanics used to control him, he was no longer useful. He suffered emotionally from post traumatic stress and physically from a career where he was a tool vs. a thinking, feeling, conscious, fellow mammal. Not uncommon in the world of competition and entertainment with nonhuman animals.

​When he got off the trailer, he was obese and couldn't take a step without tripping, his feet were in such bad shape. From the first moment we met him, he stole our hearts. He loved everyone, every human, every horse, every cat and dog. He was a character who loved to be in the middle of whatever was going on and even as he was healing himself, he was instrumental in the healing of many of the horses who came to live here.

​​We are grateful to have been the ones who got to love and honor him through his final earth chapter and we are immensely grateful for all he taught us and all he did for every being 2 or 4 legged who met him. It was a privilege to see the trauma triggers from his past life slowly lose their charge as he settled in to a life where he was loved and understood as the amazing Homer that he was. 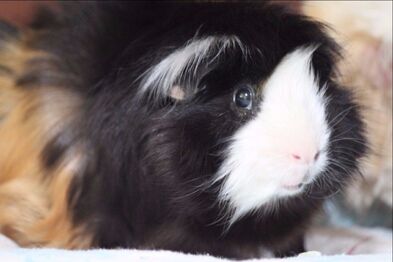 ​Mooshi was the pig who started our love affair with pigs! She went to college with a OHW family member to help ward off being homesick. Home for the holidays and when her human was studying abroad, we fell in love with her and five years later, Mooshi moved in as a permanent resident.

Mooshi was a OHW Animals and Empathy ambassador, visiting students in the classroom and teaching them about guinea pig needs, personalities, and care requirements. 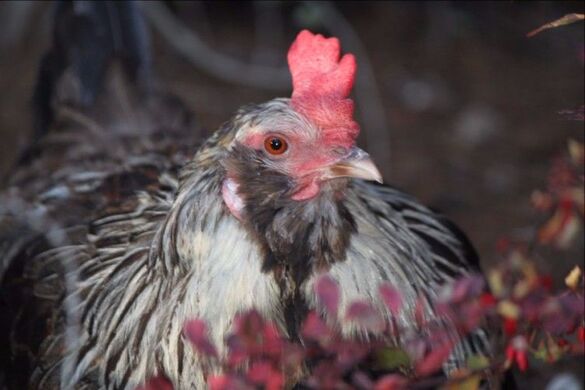 The first bird to come to Sanctuary, Willie was less than a year old when he was rescued from a death sentence because he was male. When humans breed other species for their own purposes, there is always a preferred sex, and that means death to the opposite sex. Hens are the preferred commodity but only as long as they can produce an egg a day. Roosters have minimal value in the human-chicken relationship and they suffer greatly as do the hens.

We didn't know anything about chickens when Willie came but he taught us. He was a prince of a guy, coming when his name was called, sharing meals, sleeping on the back of our chairs, and following us around to be a part of what was going on .... until the inevitable happened .... we rescued some hens and changed his world. 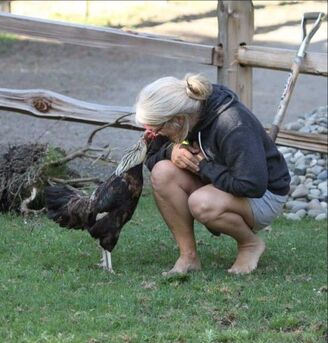 No longer at leisure to spend time with us, he now had a serious job to do and once again, he was teaching us.

Willie called the girls when he found good things for them to eat. He spent time running back and forth to check in with them if they separated in their quest for finding food. He called out different alarms for threats over head or on the ground, and when the coyote came, he fought and save two of the three girls. That fight left him with injuries that required surgery from which he healed and lived a good rooster life in Sanctuary.

Willie has passed on but the lessons he taught us about the chicken-human and chicken-chicken relationships live on.

Sunny found her way here by accident as a little bunny headed for life in a breeding barn, confined to a cage not large enough for her to stand up in. She showed up the day our good friend Homer horse passed away.

Sunny moved into the house, and we fell in love with her. Being sensitive to the fact that all social animals need social company of their own kind, we wanted Sunny to pick a friend to share her life with. We took her to a bunny rescue where she got to hop around and meet the bunnies looking for a forever home. She chose Copper.

​Sunny was spayed and Copper moved in as soon as she was ready for company. They became the best of friends and spent their days in and out of their cage with the dogs and cats, in and out of the pots on the deck and laying around grooming each other.

As Sunny aged, she developed arthritis and found movement to be painful. Once our therapeutic interventions no longer provided her with comfort, the decision was made to help Sunny transition. She left behind her best bunny friend and a host of humans who knew and loved her. 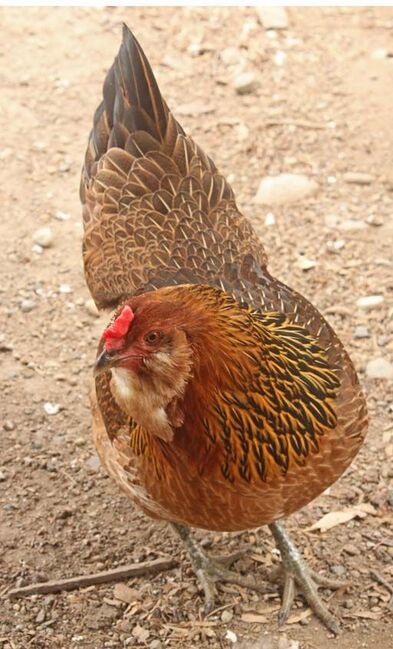 ​Bella was another hen rejected when she could no longer produce an egg a day. If hens are kept under lights so they unnaturally produce eggs year-round and are kept in stressful over crowded housing, their bodies burn out of egg laying between 2-3 years old. Their natural lifespan is at least a decade. Our oldest hen Daisy lived until she was 13.

We quarantine our hens for a couple of weeks to be sure they are healthy before slowly introducing them to the flock. The first morning after her arrival we heard a strange noise coming from the garage. It sounded like an awkward crow. As the days progressed, she perfected that crow and started exhibiting other rooster behaviors too. Like calling the other hens over to eat a treat she found while foraging.

Her previous human was stumped ... she had not done that with him. She, in fact, laid green eggs. We did some research and found the science around hens becoming more rooster-like in their behavior than hen-like.

​Bellaroo, like many older hens, passed away due to what was most likely reproductive cancer. She is very missed at One Heart Wild.
Donate