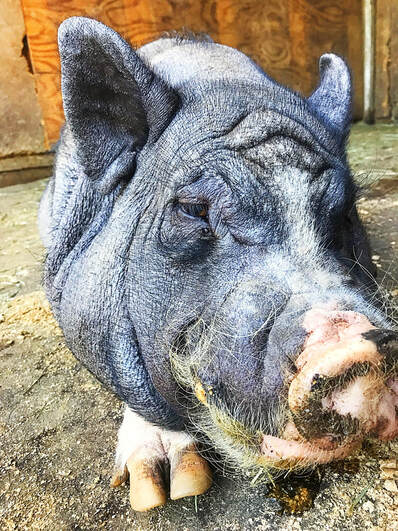 ​Long before we even knew about Wilbur or could imagine how he would steal our hearts, we longed to have pigs live at One Heart Wild. We know when people meet different species and get to know them as personalities, more like us than different, they start caring about how those animals are treated in the world. Pigs are in dire need of people caring more about their plight with humans.

In winter of 2016 we were contacted by our friends at Pony Up Rescue. They had rescued a pig in November and were looking for a forever home for him. That pig was Wilbur and we were so excited to meet him and give him a safe, loving, forever home.

He had been feral for years after a history of neglect and abuse. Both chapters of his previous life included trauma and suffering. Pony Up gave him a chance at knowing love and kindness, and as hard as it was on them and Wilbur to transfer him to One Heart Wild, he was getting the forever home he deserved and needed.

Wilbur was scared to death of long handled implements, the kind we clean horse stalls and his trailer with. He would cry at the sight of one, a sign of his past trauma. In the beginning we would have someone sit and comfort him while another person cleaned his area. After a couple of weeks getting used to everyone, we started taking him out for walks at liberty. At first, all of Wilbur’s outings were rather frantic as he nervously trotted around, scanning the property, looking for his escape routes and figuring out if he was safe or not. The day he went on his first walk, we celebrated. That was the day we knew he felt like he was home. From that first walk, he has continued to BE HOME here and has stolen the hearts of everyone who meets him. 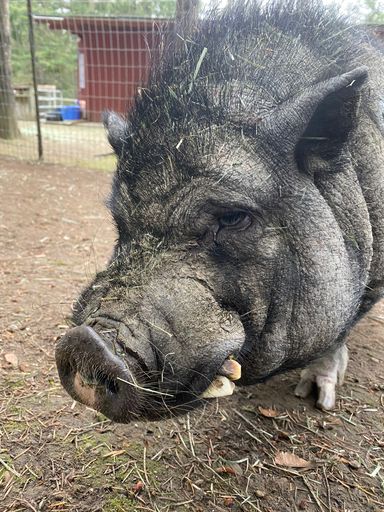 Our second sanctuary pig resident came with Flower, the goat, from Kitsap Humane Society. He too was likely attacked by dogs and his injuries and deformities weren’t new but were creating pain and suffering for him. We don’t know what his history was, but his hind quarters are scarred and hairless, his tail is missing, and his hind foot is mangled. When he was picked up, he was unable to walk without pain, something was wrong with his eyes, he had some recent injuries, and he had numerous skin infections.

Pumbaa has needed ongoing veterinary care since arriving to help him be comfortable and healthy. About six months after his arrival, we came to feed dinner and found him completely paralyzed in the hind end! It was scary for all of us, especially sweet Pumbaa. Our vet performed numerous treatments of K-laser therapy that provided him with a remarkable recovery. It turns out, he just has a pinched nerve in his back, likely stemming from his previous injuries.

Now Pumbaa enjoys his days receiving scratches and cuddles from sanctuary visitors, and he receives daily enrichment activities - rooting around the paddock for peanuts and veggies. He is just the sweetest guy.

If you need a good hug, Pumbaa is your man!

Joey was found in a dog crate in a parking lot on a hot summer day in 2019. Alone, sick and hurt, he was taken to a local rescue where he was evaluated and found to need specialized round-the-clock care.

We were contacted to provide this care and a safe, forever home. Joey grew up in the house playing with his new dog, bunny and cat friends. Once we added onto our Pig Palace housing, he was moved into his very own bedroom.

​After his traumatic start to life, Joey has grown to love human interactions, and boy does he enjoy his FOOD! He is always up for meeting visitors, clients and animal residents. When meal time rolls around, he’s the first to let us know, and happily wags his tail while he eats.