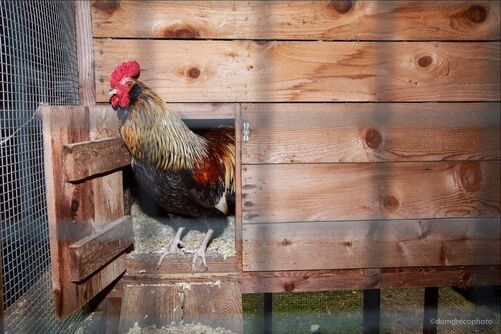 In June of 2016, we were contacted by a breeder who had a 5 week old chick she needed to rehome. The chicks momma hen dutifully sat on her eggs for 21 days and then tragically killed the babies as they started to emerge. This chick was saved and lived in the house in a box for weeks; anxious, vocal, desperate for care that the human couldn't accommodate. Within hours of his arrival at OHW, attempting to attend to his ceaseless crying when alone for any amount of time, we brought two new chicks in to give him the social contact he needed.

​The chicks, Aspen and Cedar, were a couple of weeks younger and much smaller so it was risky. We set up a large cage in the office with a divider between them thinking proximity through a safe fence would allow them to get to know each other. He paced the divider, calling anxiously. We thought the anxious behavior was temporary but it wasn't. He was over the top, squeezing through a three inch gap before an hour had passed ... only then did peace reign.

​He was bigger than both of them put together. Emotionally he was way behind the girls. He slept with them, ate with them, followed them around and freaked out when they started doing more sophisticated behaviors like rolling and bathing in the shavings, jumping up on the roost and off again, exercising their legs and wings, and jumping out of and back into the coop from the office floor.
​​
Soon little practice crows sounded off from the office making his gender known. The threesome were a little family. He learned from them and they provided him comfort and the social contact he craved. At 6 months old they moved to a coop outside, and we envisioned they would stay together as a little flock. That was not to be, Phoenix's early anxiety was blooming into what parallels reactive attachment in humans and it was aimed at people and causing anxiety for the girls. Aspen started to mirror his attitude towards people and Cedar starting avoiding them both. We made the very difficult decision to begin integrating the sisters in to the flock.
Today, although Aspen has passed, Cedar is happy and kind and is living a stable social life with her flock. Cedar hangs out with Phoenix daily but doesn't have a desire to move back in with him.

​Phoenix continues to be reactive in certain contexts and sweet in others. He has also continued to be a very vocal guy. He currently resides in his own house near the sheep. He has connected strongly with one of our young clients and is a different bird in her presence. He remembers and recognizes her even when there are weeks between visits. His early life trauma has impacted him but he is healing and living a life that is as rich as we can provide. ​ 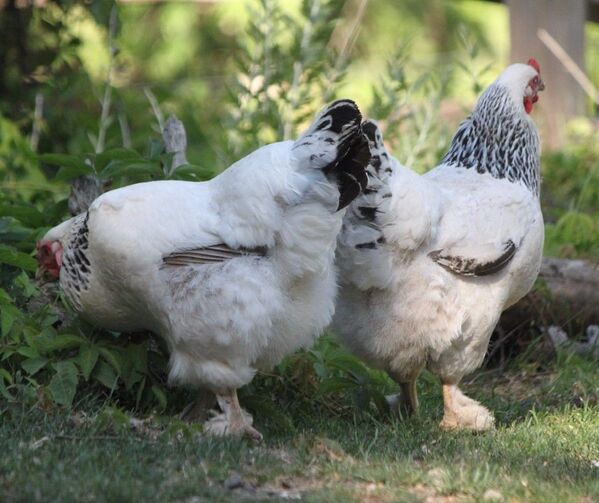 ​Cedar, pictured here with sister Aspen, has grown up to be a lovely addition to the flock. It has been fun to watch her personality develop from the time she was just a few weeks old until now. Many of those early traits have remained. Aspen did everything first and if all went well, Cedar would eventually follow.

​​Prior to Aspen's passing, the sisters could always be seen together when they were out and about and they developed a very strange sleeping arrangement. They would take turns sitting on top of each other like a momma hen would do for her chicks. At first we thought it was a fluke but after many nights checking and taking photos, we have confirmed that is a thing between the two of them.

Since Aspen's passing, Cedar has made new hen friends and spends her days socializing, dust bathing, and looking for bugs.

Orchid was a chick brought into a young family with a two-year-old who wasn't careful or kind to her. Without strict parental supervision, Orchid was subjected to a lot of pain and suffering, and when she was big enough she tried to protect herself and that almost ended her life.

Thankfully she landed here in Sanctuary. She is quite a character. Happy to squat down for a pet, happy to be held for a minute or two and always keeping a sharp eye on anything a human has in their hand that may be food. She will leap three feet off the ground and grab a potential treat before the human ever knows it's on her mind.

We had some volunteers drop by one day, bringing the most amazing vegan donuts. While we were enjoying a visit and sharing our excitement about the treats, Orchid came out of nowhere, jumped up, grabbed a glazed strawberry filled delicacy from a hand, and proceeded to devour it. Good Effort Orchid!

Orchid is an active part of our Animals & Empathy Program as well as in individual therapy work - she loves going to school and is fine having a diaper on to prevent unwanted poos from landing on the classroom floor.
Donate